‘Why do I need a hallway when I have no neighbors?’ 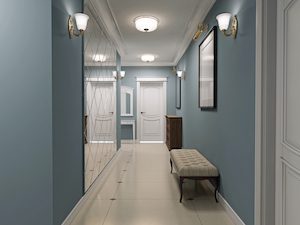 The residential buildings erected in recent years seem to trend in two distinct directions. Developers either improve properties with as many tiny apartments as zoning will allow or they create large, expensive apartments. The size of these high-end units is only limited to the footprint of land on which the building sits.

Both the 1938 code and the Multiple Dwelling Law made clear that, in most cases, buildings need two means of egress from every floor and that, in every case, tenants do not need to go through other tenant spaces to reach those means of egress. Thus, the introduction of a rated corridor onto which every dwelling unit opens was never considered a radical or controversial idea.

While the 1968 code was in effect, it was also widely agreed that floors with only one apartment did not require a corridor or public hallway. Other sections of the code prohibited apartments from opening into stairs, so it was generally accepted that a vestibule—as small as 3 ft. by 3 ft.—in front of the stair door created a suitable intervening space on a single-apartment floor. Consequently, many large floor-plate apartments accessed their stairs through spaces the size of closets. As a matter of fact, these spaces often made great storage spaces. Using scissor stairs, clever designers figured out ways to lay out floors with two—and even four—apartments that accessed their egress stairs through closets, er, vestibules, avoiding the need for a corridor that consumed rentable or sellable square feet.

This was actually not a new requirement. The 1968 code also required the intervening public hall. However, the language was not nearly as clear, and it was rarely cited as being required.

Initially, both the design community and the Department of Buildings (DOB) overlooked this section, but eventually, enforcement began. Applicants had some success getting the old vestibule system approved via determination, but the DOB soon stopped accepting that solution as a viable alternative to what the code clearly called for: a rated corridor. The inclusion of such a corridor, especially in buildings with relatively small floor plates, became an irritating necessity in the design of the whole-floor apartment, interrupting the flow of the apartment design and eating up sellable square footage.

Architects and owners readily agreed that this requirement had to be a mistake in the code. Surely, it was just a poorly worded section that had caused unintended consequences. When the code committee convened to start reviewing what would become the 2014 (current) version of the building code, we architects who served on the egress sub-committee were eager to address this error and to carve out the logical exception for the single apartment that encompasses a whole floor.

A Matter of Life Safety

I have written before about having the privilege of serving on the egress sub-committee, one of a handful convened by the DOB to review the next version of the New York City building code. Each committee consists mainly of architects and engineers who represent both government agencies and private industry. Representatives from the New York City Fire Department (FDNY), the Real Estate Board of New York, and other groups with a stake in the process of developing or operating buildings are also normally present. The committees meet regularly for a year or more, reviewing every line of the proposed code. Unanimous consent of all members is required to approve any code section. The members take their role seriously and largely leave egos and self-interest at the door.

When the day came to review the intervening public hall issue, it looked like professionals would quickly reach a consensus to include an exception for the whole-floor single apartment. Then, the FDNY representative spoke. Architects and engineers devote a lot of design time including code-compliant fire prevention measures in their buildings. Little or no time is spent trying to understand the consequences of a building’s design in the unfortunate circumstance of an actual fire.

FDNY had strong objections to carving out any exceptions to the intervening public hall. Apparently, that corridor was essential for staging the firefighters and equipment needed to battle a blaze, especially in high-rise buildings. Firemen normally stage their operations two stories below the level of the fire. The staging area needs access to both stairs, allowing standpipe hoses—as well as personnel—to run from one stair to the other. The vestibule method did not suffice due to size and the aforementioned tendency of tenants to use them as closets.

After much negotiation, FDNY agreed to some design flexibility for buildings that were not considered a high-rise, such as the use of certain door types. A hall would still lead to the two stairs, but it could be within the apartment. Also, bedrooms and other rooms could open to it if the design used specific smoke- and draft-control doors. See Exception 2 below.

§28.2-1014.4.1 Group R-2 nonhigh-rise occupancies. In buildings in occupancy Group R-2 not subject to Section 28.2-403, a door from a dwelling unit shall open into an intervening public hall. Such public hall shall be constructed as a public corridor in accordance with Section 28.2-1018.

1.1. A building that is both three stories or less in height, and contains two or fewer dwelling units per story; or

In the very rare case where a building consists of duplex apartments that take up two entire floors, half of the required intervening public halls can be eliminated. (This exception will not be exercised very often.)

Architects, stop questioning code consultants when they mark up your plans and direct you to create a corridor in that whole-floor apartment. Owners and tenants of single-floor apartments, be kind to your architects when they insist upon including that ridiculous hallway. If you are ever unfortunate enough to have a fire in your building, you may be very grateful for that intervening public hall.

If you have any questions about this article or how it affects your projects, please contact Metropolis Group at 212.233.6344.