New Memo Cuts Through the Fog on Outdoor Uses 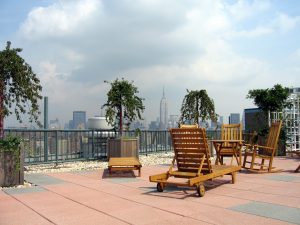 A couple years ago, rumors started circulating that the Department of Buildings (DOB) would only permit rooftops and terraces to be occupied for residential amenity space or restaurants and cafes with additional outdoor seating. Those rumors were absolutely correct, and their ramifications made the local news. DOB started to revoke determinations and approvals that allowed office buildings to provide terrace amenity areas for employees.

While converting an unoccupied roof to an occupied one has always raised a host of code and egress issues, DOB’s biggest issue arose from concerns that such occupied terraces violated the Zoning Resolutions. Not even DOB is above the Zoning Resolutions, in the same way that local police must uphold the laws that they enforce.

The issue was driven by two very simple and succinct sections in the zoning text. ZRs 32-41 and 42-41 specifically mandate that, in commercial and manufacturing districts, all uses must be located within completely enclosed buildings. On the face of it, those two sections ban outdoor uses in huge swaths of the city. However, that’s not really how the zoning works because of a concept where “the specific controls the general,” as outlined in ZR 12-01(a).

In other words, if zoning generally prohibits something, but specifically allows it somewhere else in the text, then it is actually permissible. Restaurants have an easy time making a case to a plan examiner, as the plain text description of a restaurant’s zoning use group (6A) includes outdoor table service. Other uses are specifically permitted to be outdoors as well, such as water parks or driving ranges, as they fall under use group 13, generally permitted in manufacturing districts.

Further complicating matters is the way DOB interprets building code occupancy and load. The occupant load of a given space is established by either Table 1004.1 of the 2014 code or Table 6-2 of the 1968 code. DOB would interpret those tables in frankly strange ways with regard to recreation space. A classic example involves residential amenity terraces and spaces. While permitted and sometimes required by zoning, residential outdoor recreation space has always put plan examiners in a tailspin because residential amenity space, with the sole exception of fitness centers in the 2014 code, was nowhere to be found in either table. Because the terraces were not themselves dwellings, which allow up to 200 s.f. per occupant under 2014 code and 140 s.f. per occupant under 1968 code, plan examiners consider them analogous to an eating and drinking establishment with “unconcentrated” tables and chairs. However, because the occupant load for such a use is clearly higher than it would be for a dwelling, occupant loads on residential rooftops would explode.

At 15 s.f. per occupant in the 2014 code and 12 s.f. per occupant in the 1968 code, creating approximately 1000 s.f. of recreation area would make the space a Place of Assembly—something that doesn’t make much sense for a few residents enjoying the sun with guests. To add to the madness, terraces are considered residential occupancy on drawings and paperwork, so even the smallest of recreation terraces would trigger two exits (or exit access doors). A restaurant can have up to 74 people before triggering two doors, but our tiny recreation terrace triggers two doors at just 20 occupants if classified as residential occupancy group R, per Table 1015.1 of the 2014 code (Table 6-3 of the 1968 code). Since the doors must be remote from each other, designing amenity spaces without over-providing for egress has always posed a consistent challenge.

Fortunately, after more than half a year of waiting, the DOB finally released a memo clarifying this confusion. Buildings Bulletin 2018-002 was drafted to explain when a new Certificate of Occupancy would be required when providing a recreation terrace, but it went way further than that.

The key points include:

a)  The pool itself is to be measured at 50 s.f. per occupant, like a fitness center would be, and

b)  The deck is to be measured at 15 s.f. per occupant, which makes sense for unconcentrated tables and chairs, as you would find around a pool

3.  Egress requirements were clarified. As a note ,residential buildings with only one stair cannot have an occupant load on the accessory roof greater than 30, per item E(ii)(1) of the bulletin

A Final Word of Caution

Now, this bulletin doesn’t mean we can run to the bank just yet. Before any terrace is utilized for human occupancy, permissible structural loads must be verified. Once a roof is occupied as an accessory terrace, it must be able to support as many people, furnishings, and fixtures as the main occupancy.  Note that most buildings in New York City were built long before outdoor spaces became all the rage, and many roofs can only support themselves and loads imposed by wind, rain, and snow. But for those owners whose roofs can support the structural and egress loads, the DOB now explicitly offers a clear way for building owners to cash in on their terraces.