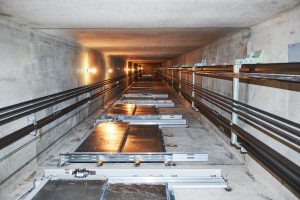 Part of the joy of this industry comes from watching lines on a page evolve into a finished building over several years. Unfortunately, thanks in part to that stretched-out time frame, some things done at New Building approval come back to haunt at sign-off time. Not even the New York City construction codes are exempt.

Take elevator hoistway shaft vents, for example. The Building Code has always required ventilation of elevator hoistway shafts, as seen in 3004.5.1 of the 2014 Code. Hoistways must receive adequate ventilation simply because there is no such thing as a smoke-proof elevator hoistway door; they all leak air and smoke rather badly. Elevator shafts need ventilation for the same reason they require protection from smoke, usually by dedicated lobbies. Once the smoke enters the hoistway, it can move throughout the entire building.  Even if we pressurize our elevator shaft with a huge blower fan to eliminate the dedicated elevator lobby, we must still vent. Furthermore, because the code likes to assume worst-case scenarios, one-third of the opening that ventilates the top of the shaft enclosure must remain permanently open.

But wait a minute. This requirement would mean that rising heat would fly right out of our elevator shaft in the dead of winter—along with a significant chunk of money. Of course, the energy code has strict provisions against such things.

Whether following the Energy Conservation Code (ECC) or ASHRAE, we must comply with C402.5.5 or 6.4.3.4.1, which says that these shaft vents must be closed during normal building operation and automatically opened only when the fire and smoke detection system goes off. Thankfully, the 2014 Code has an exception baked into 3004.5.1 just for the energy code. So in a very real sense, the exception became the rule.

Now what do we do for all those buildings approved under the 2008 Code, which doesn’t have an exception for automatic louvered openings? These properties had to comply with at least the 2007 ECC (802.3.4), which has always required these vents to be closed with an automatic-open feature. Furthermore, why does such a silly conflict even exist within the New York City Codes?

Well, the answer to the first question is that the energy code actually governs here. There is nothing wrong with 2008 Code (or earlier) buildings invoking the exception under 3004.5.1. Ironically, work in prior-to 2008 Code buildings can take advantage of this exception—say, when installing a new elevator shaft and bulkhead in an existing building—because all elevator work must comply with the 2014 Code. (The sole exception is the stretcher elevator shaft requirement for existing shafts only.) Only in buildings erected under the 2008 Code does invoking the 2014 Code exception have the slightest chance of qualifying as something as onerous as a “variance,” which brings me to the answer to the second question: only in New York.

The 2003 International Building Code (IBC) included the automatic-open exception in the opening text of 3004.3 so that it would dovetail with the 2003 IECC. However, New York City in its post 9-11 paranoia totally re-wrote that section when incorporating the 2003 IBC into the 2008 New York City Building Code and got rid of the exception. Clearly, someone on the codes council hadn’t realized that the 2007 State Energy Code would conflict with it. Now that the paranoia has shifted post-Sandy and Irene to climate change, the Building Code must now yield to the Energy Code.

If you have questions about this article or other aspects of the energy code, contact Metropolis Group at 212.233.6344.