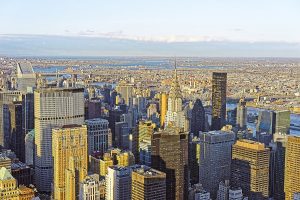 Last month, the New York City Council approved a rezoning plan designed to help East Midtown upgrade its outdated office space. The deal—four years in the making—marks the first time that the City Planning Commission has offered a way for developers to demolish and rebuild an overbuilt building without losing square footage, provided they are on a qualifying site. In fact, developers can now increase building density by taking advantage of new floor area bonuses.

The rezoning definitely needed to happen. While the area has long reigned as the city’s premier business district, the older office stock cannot compete against the modern buildings going up in Lower Manhattan and Hudson Yards. As a result, firms in the market for Class A office space are looking elsewhere, which drives down rents. Creative firms don’t seem to mind Class B office space in older buildings, but neighborhoods like Chelsea and the Meatpacking District hold greater appeal for these tenants. Hence, the district needs a better balance of newer Class A office space and affordable Class B space to attract a healthy mix of industries and tenants.

Such enhancements play a key role in the density bonuses, which will be primarily gained through a City Planning certification framework. Developers will earn FAR bonuses in exchange for pre-identified improvements to the subway infrastructure and for installation of public plazas. Also, any sites larger than 65,000 square feet must allocate 10,000 square feet for public space.

These aspects of the plan not only support the city’s Vision Zero Action Plan for pedestrian safety, but they are also necessary to accommodate the load generated by new workers and tenants, as the area is arguably at capacity already.

Mobile Landmark Air Rights
Under the approved plan, the zoning resolution now allows landmarks in East Midtown to sell unused air rights to any qualifying site in the district. While some special districts, such as the High Line, allow some latitude in moving air rights, this unprecedented flexibility unlocks a gold mine for these landmarks—and for the city, which will take a minimum of $61.49 per square foot, or 20% of the sale, and apply the proceeds to building new public plazas and pocket parks. This figure is lower than the originally proposed minimum of $78.60 per square foot for air rights, but the 20% cut sounds steep, especially when moving hundreds of thousands of square feet.

The landmarks air transfer offers exciting opportunities, but developers can only tap into the landmarks pool after earning FAR bonuses through transit improvements.

Energy Considerations
Of course, buildings that take advantage of these density bonuses will need to tighten their belts in terms of energy consumption. Such structures must be either 3% more energy efficient than typical NYCECC 2016 buildings, or must use district steam for the building’s heating and hot water systems.

Hostile to Hotels
The rezoning plan focuses on commercial development, but it also includes an unfortunate change affecting hotels. Now, new hotels within East Midtown require special approval by CPC. This requirement adds even more aggravation to an industry that is already under fire, especially in a neighborhood that has many hotels and is popular with tourists.

The Bottom Line
In many respects, the changes make sense. The CPC special permit allows owners to demolish and rebuild older structures that don’t have basic amenities like central air conditioning and modern elevators. Also, any new development—particularly if it increases density—will further tax the existing transit infrastructure, so tying development to transit upgrades offers a tidy solution.

Hopefully, the zoning plan may equalize real estate development. Certain neighborhoods are a little too hot, but lack the existing transit access of East Midtown. Driving development to the far west does not seem logical when most of the transit investment is taking place on the east.

For questions regarding the zoning changes, please contact Metropolis Group at 212.233.6344.