Energy Models and the Bottom Line 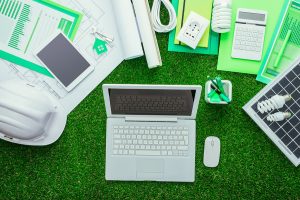 It’s no secret that buildings are responsible for one-third of total energy consumption in the U.S. economy, and understanding ways to lower that consumption has been driving energy codes since 1975, with the release of ASHRAE Standard 90. Energy consumption is most easily understood in terms of dollars and cents, rather than therms, watts, or whatever other units energy may arrive in at our doorstep. Thus, understanding a building’s total energy performance becomes a lesson in basic economics. The less we spend on energy each year, the better the performance of our building is.

With summer Con Ed bills piling up, many of us intimately understand this simple concept. Each new energy code always includes an analysis of the cost savings that owners and developers should reap with compliance (notwithstanding the associated up-front costs). Per the American Council for an Energy-Efficient Economy, ASHRAE Standard 90 has gotten twice as efficient since its inception, with owners of the latest 90.1-2013 buildings paying 50 cents on the dollar for energy, compared to their Standard 90 of 1975 counterparts.

Use of Energy Models

Calculating these savings can happen in two ways–through auditing existing buildings and simulating the performance of proposed buildings. The former assesses buildings for energy performance after the fact, while the latter allows designers to simulate their proposed building against a baseline building to establish whether it meets energy code requirements. Energy models can be very useful because they effectively allow designers to vary major aspects of the energy code.

Generally speaking, energy models are deployed because either:

Working under option A, we can deploy an Energy Cost Budget (ECB) method energy model, as described in Section 11 of ASHRAE 90.1. ECB energy models consist of two parts: a baseline building model that complies fully with all regulations and provisions of ASHRAE 90.1 Sections 5-10, and our proposed building model. If the proposed model spends less money in a year on energy than the baseline, then it passes energy code and approval can follow. If, however, the proposed model has higher annual energy costs, then the proposed design must be adjusted to lower those costs.

When going for LEED certification, designers should follow ASHRAE 90.1 Appendix G standards, or the Performance Rating Method (PRM). Appendix G’s baseline buildings aren’t typical Section 5-10 buildings, but adhere to a greener standard. In addition, Appendix G sets forth different rules, as the baseline model has to be run at all four cardinal orientations, with the runs averaged out.

These models are performed with computer software, which generates reports summarizing the proposed and baseline models. These reports are summarized further on an EN-1 Excel spreadsheet available on the Department of Buildings’ website, which is mounted on the EN-drawings and submitted for DOB review, along with a complete plan set that includes all the trades and supporting information for the reflected model.

While energy models are powerful tools, they are complicated, and the DOB takes them very seriously. For simplicity’s sake, I often advise clients—even if they eventually plan to go for LEED—to establish basic energy code compliance with the simpler COMcheck method, provided they can pass. COMchecks save all parties time because they are easier to produce and faster for plan examiners to review.

That said, for clients with time on their side who are interested in maximum energy efficiency, the DOB energy code team can certainly ensure that models are performed correctly and that the supporting information in the drawing set matches perfectly.

While energy models are more challenging, they can be, dare I say, less boring?