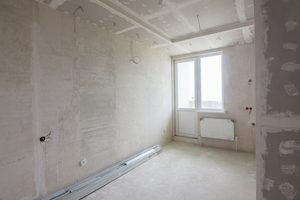 As an architecture major in an engineering school, I was atypical from most of my peers. I did not eat, sleep, and breathe math. One of my roommates was an electrical engineer with way too much time on his hands. He calculated the odds of winning the big prize in Lotto (no Mega Millions back then). If you play the same number twice a week for 50,000 years, odds are two to one that your number will come out.

Many have said that finding a good apartment in New York City is as hard as winning the lottery. As a matter of fact, one must win an actual lottery to obtain the city-sponsored subsidized apartments offered by some new developments. Needless to say, when people are lucky enough to purchase a great apartment, they don’t want to let it go.

A single man or woman can live fine in a one-bedroom space. Then, a spouse comes along and perhaps a small child or two. Still, creativity can make things livable. Nobody ever eats at the dining room table anyway.

But bunk beds and temporary partitions only go so far. Things get tight, nerves start fraying. Reluctantly, the moving discussion starts. You resign yourself to giving up that apartment in that prime location when… a miracle occurs. YOUR NEIGHBOR’S APARTMENT IS FOR SALE!!!

Now, with a little luck—and a lot of money—the family can stay put. All you need is an accepted offer, a prepared plan, and a contractor to connect the two apartments. Of course, as with all things construction related, you’ll also need to file with the Department of Buildings (DOB).

For many years, the relatively simple process of physically connecting two apartments involved a complex DOB filing. A combination required an Alteration Type 1 application, with an amended CO to close out the application. Anyone who read last year’s series on TCOs knows how complicated and expensive that process can be.

To provide homeowner relief from the onerous CO system, the DOB changed policy in 1997. Technical Policy and Procedure Notice (TPPN) #3/97 allowed apartment combinations to be filed as Alteration Type 2 applications. COs were no longer required to close out the filings. Filing conditions under this TPPN were pretty straightforward and simple.

However, one condition is often missed, and it can cause delays and extra expense.

The condition pertains only to condominium buildings. When combining two condominium apartments, applicants must obtain a tentative lot number from the Department of Finance (DOF). The approved Tentative Lot Number form (RP-602c) must be presented when filing at DOB. For DOF to issue the tentative lot number, applicants must prove that both apartments are in common ownership, with all taxes paid.

While a tentative lot number can usually be obtained within a week of filing, finalizing the new lot number is a costly and time-consuming process. Modifications to the condominium drawings originally filed with DOF and the offering plan filed with the Attorney General’s office may need amendment.

That said, DOB does not ask for proof that the new condo lot has been finalized. We also asked DOF directly if they require condo owners to merge their tax lots when combining apartments. The answer was “no.” By keeping the tax lots separate, owners will pay slightly higher taxes than if they combined lots. The tax savings, however, would most likely be less than the expenses of finalizing the condo lot merger.

The only type of apartment combination where DOF would insist on finalizing a tax lot merger involves creating additional floor area that was not part of either apartment. An example of this type of merger is when two units are combined at the end of a corridor. While it may seem logical to merge some of that corridor into the new combined unit, the DOF considers the corridor a common area that assigned to the condo association.

Absorbed into an apartment, the corridor becomes part of the apartment’s tax lot, increasing the lot’s square footage. Since taxes are based on square footage, DOF would raise the assessment—and the tax bill—on that lot. The only way to properly document the change is to finalize the tax lot and incur the costs associated with that process.

An alternative way to grab that extra space without changing the tax basis of the combined apartments is to create a license agreement with the condo association. For a fee, the apartment owner would secure the right to use the common area without taking actual possession of it. The condo board would still be responsible for the taxes.

Architects and designers who are approached by lucky apartment owners with the opportunity to combine units are wise to clarify whether these units are condominiums or not. Improper planning can create significant additional soft costs, as well as significant time delays. Planning the combination so the tax basis does not change will always serve the client’s best interest.